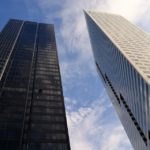 If we are to trust Jerome Powell, Chairman of the Federal Reserve, then we will be able to believe there is a “remarkably positive outlook” for the US economy. With  unemployment at 3.9 percent and inflation at 2% which is pretty much the Fed’s goal, Powell explained:

“While these two top-line statistics do not always present an accurate picture of overall economic conditions, a wide range of data on jobs and prices supports a positive view.  In addition, many forecasters are predicting that these favorable conditions are likely to continue.”

Regarding the de-escalation of the 30-stock Dow to 356 points marking its worst decline since August 10th, along with the highest level yield of the Benchmark 10-year Treasury since 2011 to above 3.2 percent, Federated Investors Vice President, Steve Chiavarone said:

“When you move at this pace in a short amount of time, it’s natural for the market to take a breather. The level of the rates does not concern us. That said, moving more than 10 basis points in two days is a different story. Pace matters and it bears watching.”

“The current move higher looks to be an adjustment to several months of data that suggested that the US economy has accelerated over the course of 2018. In particular the labor market looks to have tightened considerably, and recent commentary by the FOMC suggests that this has not gone unnoticed. With nominal growth in the US finally breaking higher and the FOMC conceivably pushing the policy rate up to 3.0% by this time next year a 10 year yield above 3.50% hardly strikes us as outlandish.”

← Trading FOREX Like a Hedge Fund
US Treasury Bonds →